IN THE FIELD SIGHTING

Alfalfa and mixed hay can sometimes take a back seat in many farming operations. We get the most pressing issues done first and “make hay when the sun shines”. After being out in a few hay fields that had alfalfa at full bloom, I noticed quite a few blister beetles on the blossoms. Blister beetles don’t cause a yield loss from a tonnage stand point but can make your livestock sick. There are three different types: Black, Striped, and Gray blister beetles. 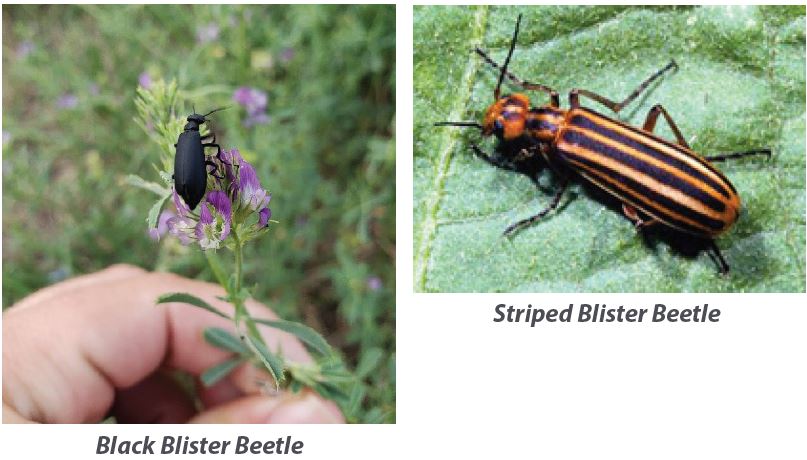 Blister beetles are identified by their round head, narrow neck, and elongated bodies with wings that do not cover the entire body. Blister beetles contain a chemical called cantharidin. This highly toxic chemical causes blisters when crushed on your skin, which is how they get their name. The blistering also occurs on the interior stomach lining of cattle, sheep, and horses, causing pain, discomfort, and even death in horses. The black and gray beetles contain approximately 10 percent less toxin (cantharidin content 0.5 mg/beetle) when compared to the striped beetle (cantharidin content 5 mg/beetle). The number of beetles ingested that can be fatal in horses is listed below in Table 1.

Blister beetles are well known to cluster in certain areas of the fields and on specific plants. A uniform scouting method across the entire field will be best for determining the level of infestation. Spraying the beetles is not an option as it will kill the beetles in the field and could allow them to be rolled up into the bales and ingested by your animals. Because they are attracted to the blossoms the best method is to harvest alfalfa by the bud stage before the beetles become attracted to the field. Avoid using crimping in your harvest method as it will crush the beetles in the hay and the toxin doesn’t break down quickly. Use a sickle style mower and allow the hay to dry for at least two days before raking into windrows; as the flowers dry up the beetles will leave the field. Because they don’t affect yield, blister beetles are seldom a concern for producers. However, for the well-being of the livestock we need to be scouting for them.