Did You Get Your Nitrogen Fix Today?

A commitment toward innovation and choice has always been at the forefront of the Legend Seeds product offerings to provide dealers and growers with access to leading-edge technologies and yield enhancement solutions to boost yield and maximize ROI. One product that was introduced in the spring of 2019 and will be offered again through Legend Seeds in 2020 is Envita™, produced by Azotic North America.

Envita is a commercial product name for the bacteria Gluconacetobacter diazotrophicus (Gd) and was discovered naturally living in sugar cane, where they convert nitrogen from the air into a form the plant can use (fix nitrogen).  Over time Gd has been evaluated and developed for production agriculture systems.  A feature that distinguishes Envita is that it colonizes and lives in both the above ground and root portion of the plant.  It is not limited to the roots – like many legumes.  This is nice because the nitrogen that is fixed doesn’t have to be translocated from the roots to the rest of the plant and may be more efficient within the plant.

When monitoring and observing Envita this growing season, we compared corn treated with Envita to untreated corn and illustrated the various benefits across multiple locations:

Overall, Envita offers a threefold advantage to corn and other cropping systems:

Want to learn more?  Download our In Field Highlights Flyer: 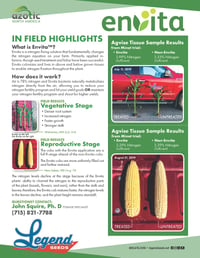