It seems like Mother Nature has been very generous with rainfall in certain areas of the Midwest. With the significant amount of rain accumulating, we are seeing flooding and ponding in some soybean fields. 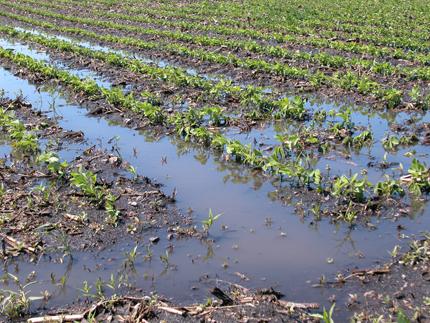 When dealing with flooded soybeans, the extent of the damage will depend on several factors:

1. Duration of flooding: Soybean plants can tolerate a fair amount of flooding. Typically, fields flooded for 48 hours or less do not experience yield losses. If the fields are flooded for more than four days, plant growth is delayed and plants typically are shorter with fewer nodes. With more than six days of flooding, stands and vigor are dramatically reduced, making it hard for the crop to fully recover. After seven days, stand loss will be significant. Once the reproductive stages have started, the impact of flooding on yield potential becomes more detrimental.
2. Temperature: Plant respiration is affected by the temperature of the flooding water. Higher water temperatures increase the speed of respiration, which reduces the amount of oxygen in the soil available to the plant. With less oxygen available, the plant will begin to rot. Cooler water temperatures slow the rate of respiration and decrease the chance of yield loss.
3. Rate of field drying: The faster the soil dries after flooding occurs, the less likely the soybean plant is to be damaged, which could affect yields. Yield reductions are greater for fields with clay soils versus silt loam soils. Flooded clay soils take longer to dry than silt loam soils; therefore, soil type can affect the damage in flooded soybean fields.
4. Diseases: Flooded conditions and saturated soils promote many diseases that growers should be watching for. Wet conditions are favorable environments for disease to grow and infect plants. The two biggest disease threats are pythium and phytophthora. Pythium is typically seen early season and doesn’t kill plants past the V5 growth stage. Phytophthora, on the other hand, can kill plants at any stage of development. 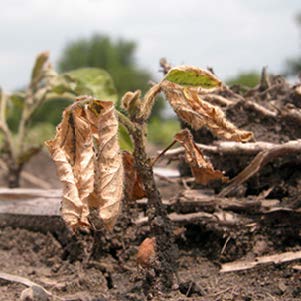 Depending on the duration of flooding, temperature of the water, and soil drying rate, the damage to soybean plants can be anywhere from minimal to quite extensive. That’s why it is important to scout soybean fields after flooding to diagnose the condition of the crop. For more information, contact your local Legend Seeds agronomist. 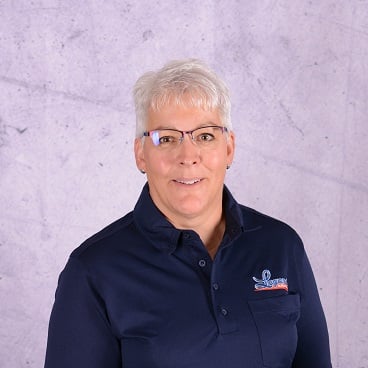