Throughout the last couple weeks, we have visited multiple L.E.A.P. locations and are getting excited for silage harvest which will be here before we know it. There were multiple things that we saw at these plots, but two things really stood out: stink bugs and Goss’s wilt. 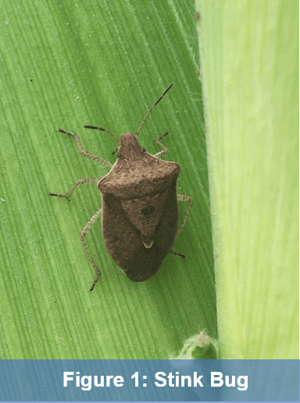 While out in the L.E.A.P. plots, we discovered stink bugs throughout the plot. Stink bugs have a shield-shaped body starting from nymph stage to the adult stage. The adults typically grow to be 3/4 inch long. Stink bugs have mouth parts that pierce into the plant and inject enzymes then suck fluids from the plant. Adult stink bugs hide for the winter in corn leaf litter, or in wood piles. Once the adult stink bugs come out for spring, they feed on a variety of hosts.

Nymphs and adult stink bugs can damage corn early but this time of year they damage the corn by piercing the husk and feeding on the developing kernels. This damage can happen from kernel formation all the way to the hard dough stage. Damage appears as missing or shrunken kernels and severely damaged ears tend to curve like bananas.

For stink bugs, thresholds are based on counts of large nymphs (1/4 inch or greater) and adults, as those are the most damaging stages. One stink bug per 4 plants (25% infested plants) prior to pollination, and 1 stink bug per 2 plants (50% infested plants) after pollination up to early dough stage. If thresholds are met, the standard insecticides for corn should be effective. 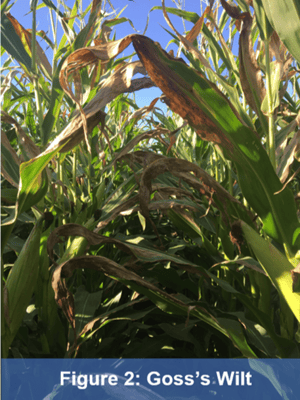 To tell the difference between Goss’s wilt and other diseases, there are two characteristics to looked for. The first characteristic is the dark water-soaked spots near the edges, which are often referred to as "freckles".

The “freckles” look as if pepper was sprinkled on the leaf. The second characteristic is a type of ooze on the leaf. Once the ooze substance has dried, the leaf may look shiny like a type of varnish. Goss’s wilt also has a systemic wilt phase. This phase affects the vascular system which discolors the stalk and creates a rot which will wilt the plant and typically leads to plant death. The pathogen overwinters in infested residue. The pathogen enters the corn plant through injury wounds from weather events that produce hail, or strong winds.

To manage Goss’s Wilt, planting resistant hybrids is the most effective action of disease control. Keep in mind that resistance does not stop the disease, but yield losses should decrease opposed to planting susceptible hybrids. Performing any type of tillage practice that buries infested residue may also be effective in reducing new infestations. Planting other crops such as soybeans will help minimize corn residue, but the bacteria will never be eliminated. Controlling weeds that are hosts for the pathogen such as foxtails and barnyard grass may also help with this disease.

For more information on these topics, you can visit the following sources from the University of Nebraska-Lincoln Extension. Goss's Wilt & Stink Bugs.

Legend Elite Advancement Project (L.E.A.P.) is our proprietary, in-house research program. It validates data on hybrid genetic performance over time and agronomic placement. Our L.E.A.P. plots are used for product evaluation, selection, and positioning on the right soil type and in the right geography to consistently deliver high value products to growers. Since 2014, we've conducted 85,890 replicated corn trials across 68 locations. As a result of our rigorous testing, we advance only the elite hybrids into our line-up, averaging 19 new products per year out of the thousands we tested.
Visit our Locally Proven page to find L.E.A.P. locations nearest you! 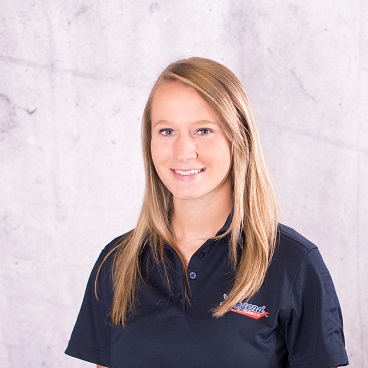